Tom and John both took pictures at the Mothers of Invention show. They also took pictures at the interview. Unfortunantly at this time the negative from the experience that has been located is the one below. We are still on the search for more of them. Tom remembers Frank Zappa as being very intelligent and well spoken. All pictures taken by Tom and John Franklin. To see a picture enlarged simply click on it. Pictures featured on this website are internet quality. For full quality pictures please attend one of our upcoming shows. A Closer Look interview with Frank Zappa will be below the picture. 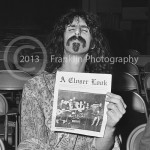 8599 Frank Zappa with a copy of A Closer Look magazine. Photo by John Franklin. Tom’s pictures of Frank have been lost. Only this one remains. Hopefully more will be found in the future.

It is one thing to listen to a Mothers of Invention record and really groove on it. It is quite another thing to meet the leader of The Mothers and groove on him. This is what happened as I met Frank Zappa for the first time in an informal interview.

“But who is Frank Zappa?” This question crossed my mind as I searched for Mr. Zappa’s hotel room (Why is it that hotel room numbers never seem to have a set pattern when you’re trying to find a certain room?).

I was met at the door b Frank who beckoned me enter and welcomed me with a firm handshake. After introductions we started the interview.

We began by discussing the Mothers of Invention show at the Phoenix Star Theatre. I asked Frank what he thought of the show and he remarked, “I thought it was a good show, myself.”

Frank Zappa. But who is he? Impressions began to form in my mind.

“Yes,” I volunteered helpfully. “But what did you think of the audience?”

Frank Zappa looked straight at me. His clear eyes showed patience and willingness. His answers came unhesitated and well stated.

“The audience was good…my favorite part of the show was when Roy tied a string to Ian’s shoe and pulled the shoe around the stage as if it were a dog.”

Frank went on to explain that Ian usually has his shoes off while he is performing.

“Zappa (as he is often called) is a very down-to-earth individual,” I thought. “He can be both funny and serious at the same time.” Slowly I began to see what kind of person this man was.

The nine piece band got it’s start with Ray, Roy, and Jim in a group called the Soul Giants. Ray had an argument with the lead guitar player who quit. Frank Zappa was asked to substitute for lead guitar and then became a permanent member of the group.

“One day I suggested that we do hard rock music. Right then the sax player quit,” Frank Zappa related. The group kept adding people till they arrived at the present number of nine members.

“I really like Phoenix. It reminds me of the place where I went to school- only cleaner.” Frank definitely plans to come back.

I asked Frank if he didn’t think Phoenix was too hot and he immediately replied that he had just returned from New York and welcomed the Arizona sunshine. The interview concluded and I thanked Frank and he held out his hand and as we shook hands he thanked me for coming.

As I stepped outside his hotel room I asked myself one final time, “Who is Frank Zappa?” The interview raced briefly across my mind and at last I knew I had the answer. Frank Zappa is sincere, honest and pleasing. I found that I too respected him and that he was the kind of person well worth knowing.

Most important of all, I learned that Frank Zappa is Frank Zappa- his own kind of person.”