Tom and John took pictures at two different Jimi Hendrix concerts. Right now these two shots are the only ones we have found but we are still searching for more. Below the pictures I am including A Closer Look article on one of the shows.

All photos by Tom and John Franklin. To see a picture larger simply click it. Pictures on the website are internet quality. To see them in true quality please come to one of our upcoming shows. 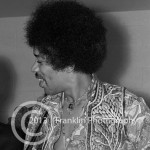 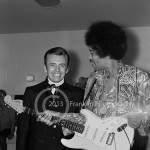 8404 Backstage shot of Jimi Hendrix and Mitch Mitchell at the 2-5-68 show at Arizona State University. Photo by Tom Franklin.

The Jimi Hendrix Experience has got to be “something else”. Nothing has been quite the same since Jimi was discovered in a Greenwich Village cafe by Chas Chandler. Since then the JHE has toured the world, astounding audiences wherever they perform.

It was after Chas convinced Jimi to go to England that Noel Redding and Mitch Mitchell were added to form The Jimi Hendrix Experience. From then on it was “big”. They played to 14,500 people in two shows at Stockhom’s Trivoli. Standing Room Only was the scene at their Copenhagen Sports Arena concert. The group was the first to sell out both shows at the London Salville Theatre. Upon their return engagement there, tickets were sold out the day the box office opened. Needless to say, the group has been termed “an overnight success.”

The first Jimi Hendrix Experience album “Are You Experience” rose to the top ten in weeks. Their second lp “Axis: Bold As Love” is a smash in England and jumped to No. 24 on the American charts in one week.

Jimi Hendrix is 22 years old and wrote 12 out of the 13 songs for the group’s first album.

Noel Redding, 21 plays guitar and also bass (an instrument he had not yet mastered when he joing the JHE. He went to audition for Eric Burdon’s new Animals, and wound up in the Jimi Hendrix Experience) Noel is looking forward to playing Japan. His ambition is to buy a club and villa in Rosas, near Bacelon, Spain.

It began with the singles “Hey Joe”, “Purple Haze”, “The Wind Cries Mary”, “Burning of the Midnight Lamp” and “Foxey Lady”.