Tom and John attended a concert for The Stone Poneys at the Brophy Prep Gym. They did a photo session and did an interview with Linda Ronstadt. Both Tom and John took pictures backstage and at the show. Currently these are the only two we have been able to recover. As soon as others are found we will add them. I’m including the article from A Closer Look below the pictures.

Al pictures taken by Tom and John Franklin. To see a picture larger simply click on it. Pictures on the site are internet quality. For real quality please attend one of our upcoming shows.

8855 Linda Ronstadt of the Stone Poneys. Photo by Tom Franklin. 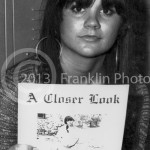 8856 Linda Ronstadt of the Stone Poneys pictured with a copy of A Closer Look magazine. Picture by John Franklin. Photo by Tom Franklin.

Linda Ronstadt and The Stone Poneys have got to be one of the fastest rising groups today. Their recent concert at the Brophy Prep Gym showed them to be performers worthy of the success which they have worked so hard to achieve.

Linda Ronstadt, who is the 21-year old lead singer of the group, was once described as “Peter Pan looking for a shadow.” She is, in fact, a refreshing type of individual, the kind that is welcomed in the high-speed pace of music.

Miss Ronstadt hails from Tucson where she lived until she realized she was in the wrong place if she was to become a singer. It was during a two-week play at the Troubadour Club in California that Capitol Records was attracted to Linda Ronstadt and The Stone Poneys. The group has signed a long-term contract with that recording company.

At the recent Phoenix performance, Linda proved her versatility, going from ballads to really “rocking out”. Linda, who does not favor singing any one type of music, explained, “It it sounds like me, I’ll sing it.” She went on to compare singing to buying a dress. “You can try on a dress and no matter how groovy the dress can be, if it doesn’t fit right, you just don’t buy it,” she said.

She calls singing “a joy” and describes her singing career as “non-stop”. Linda Ronstadt and The Stone Poneys have been on tour for three months, having just completed a tour of the eastern United States. This summer’s plans include cutting a new single and another album.

Asked if she preferred singing in clubs or at concerts, Linda replied, “It depends on the place. If the acoustics and arrangements are good, then I really enjoy singing there. I’ve been to some concerts where the acoustics were so bad, the group sounded like it was singing in the shower.” “

(No name accredited with this article but it was probably either Bev Young or Alice Diaz. It comes from page 6 of A Closer Look Vol 1, Issue 4 May 18, 1968. It sold for 10 cents)